When Encanto released on Disney + in late December, the film also became available for rental or digital possession. With this, people started to share deleted scenes and featurettes from the movie. You might have even seen this viral clip of dancers performing on the song “We Don’t Talk About Bruno”. The choreography helped the animators bring the movement to life.

Merry Christmas / Feliz Navidad🎄! Have you seen @encantomovie again?! It’s streaming on @disneyplus We’re not talking about Bruno !!!!
From the dance benchmark to the finished product! Well done to all those who participated in the making of this magical film! #encanto #Dance #choreography pic.twitter.com/NwVwHC2tSf

I love it, but I found it most fun watching deleted scenes from the movie such as “Chores!” The description reads: “Abuela has sent most of THE FAMILY to town on various praised assignments, while Mirabel, her father and uncle are invited to clean the house. Since Maribel’s father and uncle are not members of the magical family, this scene provides a glimpse into the dynamics of life with these differences as adults.

Despite the freezing temperatures of January, this scene (like the whole movie) warmed my heart.

It was also fascinating to see how basic character elements like names and powers changed.

First of all, we have to mention how important it was that by the end of production Felix was unmistakably Black. While he had a wide nose (like half the family) in this mockup, it wasn’t as clear as his final form that he was Afro-Latinx. A storyboard won’t reflect the dark brown color of her skin, but it’s obvious that the hair pictured there isn’t the texture of coiled hair 4a-4B in the final movie. In a family-focused film, Felix and Pepa’s love created more Afro-Colombian faces on screen, including fan favorite Dolores. (Not my favorite Madrigal, but she gets the most love in fan art circles.)

When the movie came out, what we got was so richly layered and thoughtful, not to say the original powers weren’t interesting, but the new powers better match family dynamics. For example, Tía Pepa’s abilities were that of a daredevil for this storyboard, and then moved on to her emotions affecting the weather. It was a great change not only because her emotional state better matched the person in the family who felt the most, but because only one character had attack power (Luisa, with her strength), prevented it. to feel like a story superhero. 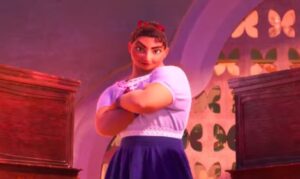 Although Dolores ended up demoted from a town healer to one with great listening skills (and zero f *** s given), an older Madrigal with the healing powers of the kitchen (the mother by Maribel Julieta) also made more sense because people don’t think about how much their peers in the family cook; this is someone they grew up with cooking. While Dolores’ powers weren’t as interesting outside of the visuals they provided on screen, it’s only fitting that they take a back seat given the large cast.

Unfortunately, there is no place for this in the final film.

As much as I loved this scene, there is nowhere it fits without disrupting the flow of the film. Based on the fact that little Antonio already has a room (unless he’s another character) in the scene, this would have happened sometime after, but when? By the time little Antonio gets his powers, the story quickly moves forward. Everyone rushes to their new room, takes the picture without Maribel (including the two non-magical uncles), and that sadness begins Maribel’s solo musical number “Waiting on a Miracle” – then Casita cracks.

Once Casita cracks, the main story kicks in and there is no logical sense in slowing the momentum for a moment. Maribel has moments with both of her parents (Agustín and Julieta), but the two expressions of love don’t bond like “Chores!” A scene like this should happen sometime before Antonio’s ceremony… a scene that takes place 15 minutes after the start of the hour-and-a-half movie.

Instead, this adorable scene has been deconstructed for its essential parts and sprinkled all over it. Maribel’s relationship with Felix fell to her son Antonio, and she still had two bonding moments with her father. I wish it had worked, because the parent generation (even before considering Bruno’s fallout after the Maribel ceremony) is fascinating. There is so much Disney could do here. 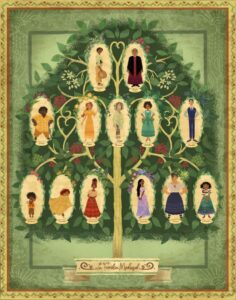 When audiences approach the story, this family has built something that cracks under pressures such as generational trauma and family expectations. This scene makes us want to see more of the original magical triplets (Pepa, Bruno and Julieta) and non-magical in-laws (Agustín and Félix), wondering what their life was like during the initial building process, how the city came to be. first reacted to them, or when their family started to grow.

Want more stories like this? Become a subscriber and support the site!

—The Mary Sue has a strict comments policy that prohibits, but is not limited to, personal insults towards anybody, hate speech and trolling.—

Do you have a tip we should know? [email protected]